To speak in class is difficult for some children but not for Charlie. He raises his hand constantly and loves to participate in class discussions. In fact, speaking in class is what he does best. He does his homework and is very well prepared. Prepared students excel in class. Also, students encouraged by their teachers do well. Charlie is doing well in kindergarten.

Sometimes Charlie talks a little too much. He dislikes sitting quietly. The teacher reminds him to share the discussion time. Other students are quiet and may think that they don't have anything important to say. However, the teacher values the opinions of all the students; she helps quiet students (to) speak out more confidently.

"The general term 'finite' is related to its everyday sense of 'limited', a finite verb is characteristically limited with respect to person and number [marked for person and tense]. (Huddleston and Pullum 88-89)

¹ a coordinator (e.g., and, but, or, nor) joins like elements. The two finite clauses are "coordinates" of and.  And carries little meaning. It serves as a marker of coordination (addition). It is not part of either clause.

² the subordinator that marks content (the clause that follows) as placed within the main (matrix) clause. That has no meaning; it merely serves as a marker for the subordinate clause and it is not part of the clause.

a relative pronoun (e.g., that, which, who, why, when, where, how) adds modifying information to a noun.

Express desire or intent to do an activity

subordinator — subordinators in English grammar include that, to, and for. A subordinator allows us to package content (a noun phrase or a clause) as the subject, the object, or a prepositional complement in the main clause. The subordinator does not carry meaning as part of the clause, rather it serves as the marker of the subordinated content.

¹In linguistics, the term phrase is reserved for category phrases rather than word groupings without a complete verb. See Phrase–a dependent in a clause.

Gerund-Participle—is a merged term for the -ing form that has multiple functions (uses). Current analysis does not support the traditional gerund vs. participle distinction. Instead, it is analyzed as one form, -ing, that functions in multiple ways.  The train is approaching the platform.  [with progressive auxiliary];  The train approaching the platform is on time. [post-position subject-noun modifier]; The approaching train was on time. [pre-position subject-noun modifier] (Huddleston 3 §1.5)

The boy is [waving his hand].  [with progressive auxiliary];

The boy [waving his hand] is annoying. [subject-noun modifier, post-position];

Express how one feels as the experiencer of an activity

Recognize how they occur in usage

Properties of primary and secondary verbs

Note that in the 2002 revision of the Cambridge Grammar of the English Language, finite and nonfinite verbs were renamed primary and secondary verbs. The words finite and nonfinite were reinterpreted as a syntactic category of the clause not the verb. However, some people continue to use the term "finite verb".

A secondary verb cannot serve as a predicate, nor can it be used in an independent clause unless combined with an auxiliary verb (e.g., can, may, will). A clause whose verb is secondary is called a nonfinite clause. This kind of clause is almost always subordinate. (Brackets enclose the nonfinite clause in each example below for the purpose of illustration.)

Properties of Finite vs. Nonfinite Clauses 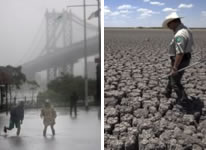 The weather is strange this year. In the South, weather marked by exceptionally high temperatures and exceptionally little precipitation has destroyed crops.  In the East, rain falling endlessly has flooded city streets.

It is unusual for us to have so much rain in the East and none in the South.  In the West, temperatures remain about the same. However, precipitation has diminished.

crops (N) — produce that farmers grow such as corn, wheat, cotton, and hay

flood (V) — fill with too much water

mark (V) — have the attribute or characteristic

Identify the verb category in each sentence.

Several couples hoped to marry this weekend. A hurricane pounding the East Coast changed their plans. It was impossible to hold their weddings as planned.

Three couples not wanting to delay decided to marry in Central Park. They said their vows standing in the rain and undisturbed by barely anyone.

undisturbed (Adj) — not bothered by anyone