Grammar-Quizzes › Noun Phrases › Nouns › Pronouns › It vs. There

Refer to weather, time, or existence

It — Weather, Time and Existence

"It" and "There" Subjects

Dummy Pronouns — It  vs. There

¹ there (pronoun) "existence" / there (adverb / noun) "location"
² A few other verbs in this pattern: accept (as), believe, consider, declare, find, make see (as)
³ Displaced subject – If the sentence can be reworded without there, then the subject is being displaced (moved to the end of the clause).  There was a friend at the door. → A friend was at the door.  Some sentences cannot be reworded and require there.  There were a lot of people. / *A lot of people were.  (The verb "be" cannot occur without a complement.)

Related pages:  There as Subject,  It / There Pronouns (weather, time, existence)  and  It / This Reference (previously mentioned reference)  It Clefts  (extraposition) 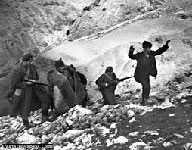 Once upon a time, [it / there] was a man who left home to go hunting with his dog. However, he did not return. His family looked everywhere for him, but they could not find him. After a long while, his wife told her children, "[It / There] is time for us to get used to the fact that he may not be coming back, at least not soon."

The children replied, "[It / There] is rather late and we have little food."

The man said, "I don't need food, just a place for my dog and me to rest."

The mother came and looked through the opening of the door. Even though [it / there] was dark, she recognized the man's dog.   [It / There] was a black spot over each eye of the dog, very much like their old dog who disappeared.

"Come closer to the door," the woman said, "and let me look at you."

She opened the door and held a light up so that she could see him.  "Where have you been?" she exclaimed, " [It / There] has been over a year since we last saw you. You went hunting for some hares."

"Yes, [it / there] is a long story," he replied, "After foreign soldiers took me, I was freed by resistance fighters. I became one on them."

The woman looked him in the eye, "Well…did you bring us some fat hares to eat?"

absence (N) — not being in a place

Crete — a large island in the Mediterranean belonging to Greece

foreign — not from one's own country

get used to (v.p.) — become accustomed to

hare (N) — a food animal similar to a rabbit

over a year (expression) — more than a year

resistance (N) — the state of going against; fighters against invaders

Determine which pronoun to use—it or there?