Grammar-Quizzes › Noun Phrases › Nouns › Pronouns › Each other vs. One another

Each other vs. One another

Each other vs. One another

¹Each other, one another: "Two people look at each other, More than two look at one another. Either phrase may be used when the number is indefinite: We help each other. We help one another." —Associated Press (2016)

²"Sophie and Jim" are antecedents of "each other". That is to say that the nouns/names are mentioned first so that we know who "each other" refers to.

See Grammar Notes below regarding the disputed usage of each other and one another.

One to the next one

Each other's / One another's

Each other / One another 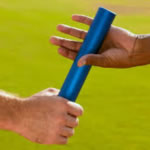 The four Moore brothers are a remarkable 4X100m relay team. James and William who are twins, age 21, first became involved in track and field in high school.  They trained together and went on to win several 100m and 200m sprint events. Their two younger brothers Harry, age 19, and Donald, age 18, weren't especially interested in track and field, but when James and William encouraged them, they began sprinting too. They also found themselves to be gifted runners.

The following spring, the older twins encouraged the younger brothers to participate with them in an upcoming 4X100m relay race, and they agreed. The two older bothers helped the younger brothers to improve their running times and their baton passing skills. As a result, the Moore brothers not only won that relay but went on to win four more and broke one state record in the 4X100 relay. Currently all four have track scholarships and are attending different colleges and doing well on their respective track teams.

baton (N) – a metal or wood stick that is passed from one runner to the other; a baton is also used by police and by marchers in parades (a twirling baton).

relay race (NP) – a race made up of usually four short "legs" (lengths) in which an individual runs and passes a baton which enables the next runner to begin the next leg, and so on, until the last runner crosses the finish line.

track and field – the division of sports that involves running, jumping, and throwing (in the Olympics)

Complete the sentence with one or more reciprocal pronouns.