Indicate completed or delayed timing for an action 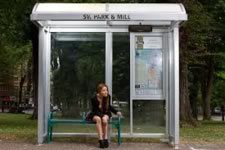 Lindsey walked to the bus stop. There she found another woman waiting.

Woman: Yes, it has come and gone already.

Woman: Yes, it was early. Mine is late though. I'm still waiting for the #41 bus. I've already waited twenty minutes for it.

Lindsey: That's unfortunate. I wonder why it hasn't arrived yet.

Woman: My phone app shows that an accident is causing traffic.

Lindsey: In that case, I shouldn't become impatient yet.

aspect — in grammar, indicates how an action, event or state expressed by the verb, how it extends over time—ongoing, continuous, repetitive, habitual. The timing is not limited to a single point in time. "The progressive takes an internal view, looking at it from inside, as it were, as something ongoing, in progress. The unmarked, non-progressive, version takes an external view: there is no explicit reference to any internal phase or any feature of the temporal flow (such as whether the situation is conceive of as instantaneous or having duration through time." (Huddleston 117)

by the time — possibly before and up to X time.

so far — thus far; up to a particular time and continuing to the future

Already vs. Yet (Polarity)

In positive or negative environments

Already vs. Yet—positive or negative polarity

*not used; incorrect / ~borderline use; awkward sounding to some

likely – probable; It is likely / probable that it has arrived.

¹polarity—some words occur only in negative or only in positive environments. Already is positively-oriented, occurring in neutral environments. Yet is negatively-oriented, occurring in negative environments (negative verbs). One way to test a clause for polarity is by adding a tag question, for example, The bus has arrived, hasn't it? (The main clause is positive; the tag question is negative.)  The bus hasn't arrived, has it? No buses have arrived, have they? The buses have yet to arrive, have they? (The main clause is negative; its tag question is positive.)  See tests for polarity in Cambridge Grammar of English Language 9 §1.1.

Negative polarity sensitive words occur in negative environments:  any, anybody, any longer, any more, anyone, anything, anywhere, at all, either, ever, long, much, until, too, yet.

Have yet to  (advanced)

Express delayed timing in a clause without "not"

Yet before an infinitive

² TBD – a placeholder abbreviation for something that has not been decided or arranged yet in a schedule " to be determined", also TBA when something has yet "to be arranged".

¹ Initial placement occurs very rarely; it might occur in a speech or in prose to achieve a particular effect or emphasis. Note the subject-auxiliary inversion.

Specify the timing of an action or activity

¹ time expressions such as like today or this month include time that is past, present and future. With the present tense, we understand the time to be present, current, now.

² for a while (PP) – can be understood in two ways: (1) having some amount of duration, or (2) being very temporary

³ keep + verb+ing – Repetition can be expressed by using the "keep" (I keep walking.  He kept smiling.)  The progressive with "repeatedly" (*I am walking to class repeatedly. )sounds awkward.

Also see Ever v. Never, Already v. Yet., Adverbs of Frequency, For v Since.

ZZZCars are Sleepers for Now

In January of this year, George Vonn, CEO and founder of AutoDrive, announced that the company's profits have decreased even though they have already have over 100,000 orders for their self-driving ZZZCar model. Vonn said that their factory was not yet supplied sufficiently to produce the cars as fast as he had hoped. The factory is still working at only 70% of its capacity. Already Vonn has made agreements to subcontract the production of batteries to other producers. However, these other suppliers have not delivered the batteries yet. He was unsure whether the problem was due to production or transportation.

Work has begun already on a new battery factory near the main ZZZCar assembly plant. Vonn hopes this will solve the slow delivery time for batteries. However, he could not say already when the the new factory would be ready.

Customers are becoming impatient because they have yet not received their cars. And they have put down $2,000 already on their order.

CEO – Chief Executive Officer (like the president of a company)

customer relations (N) – the connection of trust between seller and buyer

factory (N) – a building or group of buildings with facilities for manufacturing goods.

solve (V) – fix; be the answer to the problem

supply (N) – have an available amount of something that is needed

zzz – representation of the sound that a sleeping person makes

The Viewpoint of the Customer

In August of last year, we stood in a long line outside your ZZZCar showroom and put down a $2,000 deposit for a self-driving car.  It is now February, and we have not received notification that our car is ready for delivery. We understand that you have had factory delays; however, it has been six months since we placed our order.

We have not given up on receiving our ZZZCar, but we are becoming impatient. We would like an estimate of when the car will be ready. If the car will not be ready by the end of March, we will request that you kindly return our deposit of $2,000.

Add an aspectual adverb—already or yet—to the sentence.