Ending with a Preposition 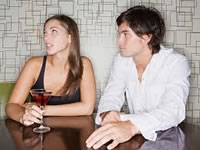 Two Placements — End of Clause vs. Before Interrogative Pronoun

*not used / ~not preferred word choice, borderline usage or requiring a special context

interrogative pronoun –  who, what, where, why, when, how

¹terminal preposition use—the question of the correctness of a preposition at the end of a sentence or clause is one which has been under discussion for more than three centuries. See Grammar Notes below regarding this disputed rule.

Grammar Disputes – examples of other unfounded grammar rules of the 1700 and 1800s.

Preposition Placement in an Infinitive or Passive Clause

Decide on level of formality to use

Determine whether a preposition is needed or not

² Nouns that include prepositions sound awkward after a preposition for place/location (i.e., Place it up overhead in the storage bin.) — indoors, uphill, overhead, underfoot, ahead, downstairs, north, northward — except if the preposition is part of a verbal phrase (i.e., I'll pick you up at noon.)  See  Prepositions that include nouns.

Preposition Placement in a Modifying Clause

Related pages: All of which  |  Verb Phrases + Gerunds

Avoid stranding the particle of a verbal idiom

Verbal Idioms — Together vs. "Stranded"

a particle looks like a preposition, but in a verb-"preposition" combination does not carry meaning; instead, it combines with the verb to form a new meaning—a verbal idiom. Unlike a true preposition, a particle does not make sense when it is separated from the verb:  The subject *up which he looked was solar energy.  The subject which he looked up was solar energy.     See Preposition v. Particle.

look up (idiom) – find in a reference book, encyclopedia or dictionary

Preposition stranding. a. What was she referring to?  b. This is the book she was referring to.   "Here to is stranded in that its complement is missing from the normal post-head position — missing, but recoverable from elsewhere in the construction."  (Huddleston and Pullum 626-31, 1433-4)

Wikipedia — P-stranding is a syntactic construction in which the preposition with an object occurs somewhere other than immediately adjacent to its object, for example, at the end of a sentence. 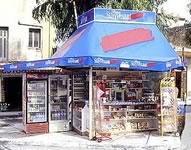 Read the Paragraphs (with terminal prepositions)

When traveling to a city such as Athens, Greece you may find yourself wandering through its streets and not knowing where you are going to. The old part of Athens, called "the Plaka", has a number of little streets leading in and out. Half the time you won't know the direction you are walking in.

Fortunately, Athens has a lot of little kiosks called "peripteros" with vendors to help you out. Periptero vendors usually know the city pretty well and can show you a map and point to the place you are looking for. Also, inside a periptero, you can find drinks, snacks, ice cream and almost anything you are in need of. For example, you can find a sun-brella, a hat, sunglasses, and sunscreen to protect your skin with.

You can even find such things as a deck of cards, a toothbrush, aspirin, or hand-sanitizer to clean your hands with. In the past, peripteros had public phones to make calls on. However, this service was discontinued since most people carry mobiles to make calls with.

Most locals (Greeks living in the Plaka) are happy to help you find your way provided that you have a map to point to. Otherwise, their instructions in Greek might not be easy to make out. If you should find yourself lost, take a break, find a little café, and order a drink to refresh yourself with. Relax and look around at the scenery that you are surrounded by.

kiosk (N) – a small structure having one or more sides open, used as a newsstand, refreshment stand, bandstand, information or security center

make out (verbal idiom) – interpret or understand  I can't make out his handwriting.

periptero (N) – a small portable store on the sidewalk of a Greek city that sells small, commonly requested items

provided that – as long as; under the condition that

vendor (N) – a person who works in the kiosk, usually the owner

Can the terminal preposition be repositioned in the clause—yes or no?

Not much.  We're going to take off.

Where are you off to?

There's a pick-up game down in Mid-town.

Those basketball courts with the name I can't think of.

OK.  I'll catch up with you later. I have something I have to check out.

Read the Paragraphs (with terminal prepositions)

Match Maker is a website that is good for finding a relationship.

Then, Match Maker will return a list of people that match up. After you read their profiles, you can decide whom you want to get in touch with.

You can send a person a "wink".  If the person winks back, then messages can be exchanged.  You can talk about whatever you want to talk about. If there is a connection, the two people can agree to meet up. Otherwise, they continue on.

A person can return to Match Maker several times to find the person s/he is dreaming of.

That's how I found my bride, whom I am devoted to.

appeal to (verb + prep combination) – interest, cause to be interested

devote (V) – give one's full attention to something

specialize in (verb + prep combination) – have particular skills and do well

wink (v. / n.) – close an eye with the intention of flirting

Practice repositioning the preposition.  Remove the final preposition from the "terminal position" (end).

Though it is acceptable to leave a preposition at the end of a sentence, the wording can be changed if the context or formality requires it.