Recognize how prepositions function in clauses

2 The subject is the "causer" or agent—the person, thing, entity, or natural force that causes the action to occur.

copular verb – a verb that links the subject to the complement, also called a linking verb. Be has no particular meaning other than "equivalent to".

Adding information required to complete the meaning of the clause

See Grammar Notes regarding  to him, (recipient of action) / for him  (beneficiary of action) / of him  ( modifier: origin, belonging to)

~borderline example in which the verb can be used alone if the context is understood.

Depending on the particular grammar system, before, after, when and while, because, though, in order to are described as conjunctions, adverbials, adverbial prepositions or temporal prepositions.  See Grammar Notes for terminology.

How prepositions function in clauses

The following are basic properties of members of the category Preposition.

(1) A preposition accepts a complement—most of them do.

A preposition serves as the head of its phrase and almost always takes a complement (a required element) such as a noun phrase, prep. phrase, gerund, or infin. clause.  Prep + ___ [N, NP, PP, Ger. AdjP, AdvP]

Jack explores inside of the canyons.   (PP–prepositional phrase)

Jack explores rather than sits around.   (INF–bare Infinitive)

Jack is outside. (P – preposition includes its complement "side")

Jack is resting awhile. (P – preposition includes its complement:  a- "for" while "a short time")

A prepositional phrase is required to complete some (a specific few) transitive verbs such as be, put, begin, hang, place, lie, lay, sit, set.

Jack is outside of the cave.  *Jack is.

Jack is lying down.

Jack explained it to us.¹  ~He explained.

(2b) A preposition or a preposition that heads a prepositional phrase may be an adjunct (a not-required element in a clause, adding extra, modifying information).

Jack paused on the trail under a tree.

Jack drank some water as he was thirsty.

Ahead on the trail, Jack saw a small cave. (introductory phase)

(3) A preposition (usually) accepts a modifier.

He ate it right up. ("completely")

The sun was straight ahead.

He was exactly between two walls. ("precisely")

He was smack in the middle of the two players.  (idiom – "exactly")

He hit the ball just / almost as high as she did.

He hit the ball clear out of sight.  (idiom – "moving to a distant point")

He hit the ball way over there.  (at some distance, in the direction indicated as "there" [a locational preposition])

*not used / ~ more information is expected

Multiple prepositional phrases may occur in a series: He wants to park inside (1) instead of (2) on the side (3) of the road.

Adverbs for Degree–Modifying a Preposition,

A  preposition can be followed (completed) by a wide variety of structures.

¹ The traditional description of a prepositional phrase is that it has an object noun as its complement. However, "prepositions allow a wide range of complement types."  Some prepositions such as instead of, except, or rather than accept a wider variety of complements than others. (Huddleston 7 §5.1 [21])  (Aarts 153)

An important note about the category Preposition

Linguistic analysis has provided us with a more accurate and concise description of English grammar than the descriptions taught to us in school before the 1980s. A word must share specific properties (functions) to be categorized as a Preposition, Adverb, Adjective and so on.  (See Function vs. Category.)

One result is that the category Preposition (capitalized) has been widened to include (1) words such as—before after, while, because, though, than, as. (Linguistic analysis determined that these words functioned more similarly to prepositions than to conjunctions, adverbs or other categories in which they had previously been placed.) (2) words formerly classified as adverbs, such as above, off, out, down, over, inside, which optionally take objects. These adverbs were analyzed to be more like prepositions (in which the object is understood) than like adverbs expressing such things as manner, frequency, degree and so on.

Another result is that prepositional complements (structures that can follow prepositions) have been widened—at home (N), in the house (NP), out of the house (PP), in stead of later (NP+PP), after leaving (gerund), because we left (clause).  A clause may serve as the complement ("object") of a preposition..

Examples of preposition use (covered elsewhere in this website)

Also called—conjunctions, adverbials, subordinators or adverbial prepositions—of reason. See Because, Because of / Despite

Also called—adverbials, conjunctions, connectives, subordinators or adverbial prepositions—of condition. See If / Unless, If / Whether.

As complements to adjectives, participles or verbs

A "complement" is a word, phrase, or clause that complete the meaning of another element in the clause.

Note that the structure is analyzed as an adjective which selects a particular preposition as its complement. That is, the preposition does not "belong" to the adjective.  See Adjective w/ Preposition.

Note that the structure is analyzed as an participle which selects a particular preposition as its complement. That is, the preposition does not "belong" to the participle. See Participle w/ Preposition.

Note that the structure is analyzed as a verb which selects a particular preposition as its complement. That is, the preposition does not "belong" to the verb.  See Verbs w/ Specified Prepositions.

Each of the above is a verb that combines with a preposition to form a new meaning—an idiom.  The meaning is figurative. See Preposition vs. Particle.

Functions: Subject – Subj; Predicate/Predicator – Pred; Complement – an element that is required by the subject or verb to complete the meaning of the sentence (e.g., object (DO) indirect object (IO), or predicative complement (PC) such as a required adjective, prepositional phrase, or adverb; Adjunct – an element not required by the verb, an optional element such as a modifier, a subordinate clause, or a supplemental clause; Supplements – clauses or phrases tacked on but not closely related the central idea of the sentence

Oldest Message in a Bottle

A fisherman pulled a bottle out of the Baltic Sea near the northern city of Kiel last April. He opened the bottle and found a postcard rolled up inside. The postcard had a note written on it, but it was so faded that it was hard to read.

Careful inspection revealed that the post card was written and put into the bottle in 1913. The author, Richard Platz who was age 20 at the time, was walking along the seashore when he tossed it into the water.

The bottle and its note were taken to a genealogical researcher who was able to locate the grand-daughter of Richard Platz. The grand-daughter, age 62, never met her mother's father, but she was interested in the discovery of the bottle. Richard Platz died at age 54 in 1946, which was six years before she was even born!

No one knows why Richard Platz tossed it into the sea, where he expected it to go, or where it has been floating all these years.  It is thought to be the world's oldest message in a bottle, and it  certainly is a curiosity. —Scott Neuman

Which word, phrase or clause is the preposition / prepositional phrase?

One could argue that carbon-dioxide is a compound word or that it is a noun carbon modifying a particular type of dioxide (different from sulfur dioxide, titanium dioxide, uranium dioxide, etc.) 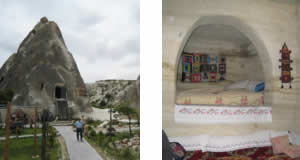 Cappadocia, in the center of Turkey, looks like a scene straight out of Star Wars.  People have lived there for thousands of years. Volcanic rock formations have been changed into dwellings. The insides of them are carved out and turned into living spaces. The cone-shaped dwellings look like homes where Anakin Skywalker might have grown up. (Star Wars main character)

It's hard to imagine how such a home could be comfortable, but one look within will prove that it is. The semi-soft rock can easily be carved away to form niches for storing things, benches for sitting or tables for eating.  The cone-shaped homes may have multiple floors with staircases rising from one floor to the next.

One family is kind enough to show their home to visitors. People are completely surprised at what they see inside. The home includes three bedrooms, a kitchen, two bathrooms, several storage areas and a television room at the top. The family receives Internet access from underground cables. Beautiful rugs and blankets made of wool decorated the walls and sleeping areas. A wooden door and glass windows complete the cozy, warm and out-of-this world atmosphere.

atmosphere (N) — the particular feeling one gets in a place

carve (V) — cut a solid material so that it forms something

cone-shaped (Adj) — a 3-D circle the rises to a point; ice cream cone

formation (N) — the act or process or forming a shape

semi-soft (Adj) — somewhat soft (can be carved, cut, scraped out)

stair cases (N) — a set or series of stairs, a flight of stairs

volcanic (Adj) — being formed from lava from a volcano

Identify the word form of the modifier highlighted in the sentence.