Past Tense vs. Past Perfect

sequence (N) – an occurrence of one thing after the other

Connective Adverb – a connective adverb expresses a relationship between two clauses, and it transitions the reader or listener from the main idea in one clause to the idea in the next clause. (Also called conjunctive adverbs, linking adverbs, or transition words.)

¹Note that some speakers feel the use of before or after with the past perfect is repetitive and unnecessary.  There is no difference in meaning when using past or past perfect in these examples.

Past perfect optionally can be used with the earlier event.

Related pages  Independent vs. dependent clause  |    After/ Before/ When  |  ¹By the time

"Backgrounding" with past perfect progressive

Also see By the time.

¹ A past perfect clause may occur alone if the second activity is understood from context.

When has two meanings:  1) same time, 2) immediately after (interruption of one activity by a second activity)

Determine which verb form that is needed to complete the sentence.

Contrasting earlier from later past 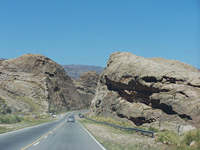 Read the events of "The Family Picture"

One summer when I was eleven, my family had the money and the time to take our first vacation. My father, my mother, my younger sister and I got into my father's '54 Ford to go to Cordoba, where my parents rented a house up in the hills. Cordoba is a city that is famous for its mountains and rivers, and it is located 900 miles away from Buenos Aires, where we lived. We drove for a long time. Finally, we arrived there.

My father wanted to capture everything in his pictures—the scenery, the family and the car. The problem was that he wanted everything together in one picture. One morning after we ate breakfast, he decided it was the perfect time for a family picture with the car, the house and the scenery—all in one shot. In spite of the fact that squeezing so much into one shot was almost impossible, he decided to try his best. First, he positioned us close to the car, but that did not work because the scenery was not included. Second, he positioned himself down the hill, but that did not work either because the car was not included. Finally, he had the great idea of moving the car to the foreground so that he could fit the family, the car and the scenery into the picture.

Since he didn't have the keys with him, he decided to push the car forward a bit. He gave my mother a big rock to put under the front car wheel to stop the car when it was in the right position. Despite my mother's best effort to put the rock in the right place, it did not work. The wheel rolled over the rock and the whole car kept rolling right down the hill.

My sister's eyes opened wide and my jaw dropped. My mother ran into the house crying. The three of us started walking down the hill to look at the car, which stopped at the bottom of hill. I remember thinking "How are we going to get back home?" However, when we reached the bottom of the hill, we were surprised to see that the car was still intact. The two front wheels were up on two big rocks as if somebody placed them there on purpose. We were so happy! My sister and I ran up the hill to give my mother the good news. My father was staring at the car and saying, "One more thing to tell our grandchildren!"

After Father put away his camera, he said, "I think I'm just going to enjoy this all with my own eyes for the rest of the trip."

intact (Adj) — together, not broken

one shot (expression) — the framing or composition of a picture

scenery (N)— the land and trees, the view

Decide whether to the use the past or past perfect form.