Focus on the "patient" or the "recipient" of the action taken

bonus (N) – something given or paid over and above what is due; extra (A teacher usually gives extra points.)
calculate (V) – find the amount by mathematical method

doughnut (N) – a cake in the shape of a tire or wheel
shift (V) – moves; changes; transfer from one place to another
surface area (N) – the total exterior surface
volume – (N) – the amount of space that a three-dimensional object occupies
Also see Ditransitive Verbs  (verts that take objects and indirect objects)

agent—the person or thing that takes action to do something. (He sang a song for them.. The wind blew the leaves.)

patient ("theme")—the person or thing that is affected by the action denoted by the predicate. The thing acted upon. (He sang a song for them..)

beneficiary—the person (or entity) that receives the benefit or enjoyment of the action. (He sang them a song. He sang a song for them.)

recipient—the person (or entity) that is the receiver or endpoint of the action. (He sang her a song. He sang a song to her. )

direct object (DO) — (usually a noun phrase) the person or entity (thing, concept, etc.) that undergoes the action expressed by the predicate.  (He sang a song.)

indirect object (IO) — (usually a noun phrase) the people or things that carry the semantic role (meaning) of goal (location), recipient (receiver), beneficiary of (one who receives the benefit of or enjoyment) an action or event. goal—The teacher sent the students home. [to]; recipient—The teacher gave Jason a book. [to]; beneficiary—The teacher saved Jason a book. [for]

static verb – (stative verb) a verb that is not dynamic; no action takes place (e.g., be, seem, appear, etc.)

intransitive verb – a verb that does not take an object as its complement (and cannot be passive). (e.g., He lies down.)

transitive verb – a verb that takes an object as its complement. (e.g., He lay the baby down.)

Our teacher gave us a project (to us).

"Recipient"  as Indirect Object Only

Our teacher asked us a question (to us).

¹ speakers occasionally use just the indirect pronoun with ask.
² He saved me time. (He did some of my work so that my work is less.)  He saved some time for me. (He set aside time to spend with me or to help me.)

"Recipient" as Prepositional Phrase Only

Our teacher announced (us) the project to us.

scars (N) – a mark left of the skin after being hurt

Also see Said Synonyms (told me/ said to me) 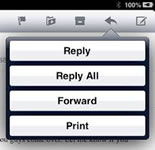 Last week, something unfortunate (happen). A friend sent an email to me.  It was really funny. I forwarded the email to a friend without looking at the rest of the email.

Unexpectedly, I received a message from my friend. He had sent me the email originally.

He showed me the part at the bottom of the email that had confidential information about his search for a new job.

He was upset. Several co-worker asked him questions about why he was looking for a new job.

I went back into my email and read the message. I was embarrassed that I hadn't read it.  Also, I had embarrassed him at work.

confidential (N) – private; not intended for other people to read

embarrass  (V) – do something that is socially unacceptable

job search (N) – the process of looking for new employment

originally (adv.) – in the beginning

Reword the sentence, if necessary, so that paragraph reads more smoothly.

A soldier's love letter to his young wife was recently found by a post office employee.

Last week, Roberts was handed the letter by the postmaster. He said that one of the postal workers who was sorting the mail noticed that it was yellowed and had no zip code, so he threw it aside.  Another employee noticed that the postmark was nearly 60 years old, so he presented it to the postmaster later in the day.

The postmaster was amused by its appearance, so he looked up the addressee, found the new address, and decided to deliver the letter personally. Roberts recognized the handwriting on the letter immediately. He didn't know that Jane had never received it.  Unfortunately, his wife, Jane, died from cancer In 2005 after 53 years of marriage.

The postmaster related to Mr. Roberts the story of how the letter was found . However, the postmaster couldn't explain the late delivery of the letter to Roberts. The postmaster said that someone probably had just found the letter in a forgotten pile of papers and put it back into the mail.

Roberts says he plans on framing the letter and hanging it in his bedroom.

addressee (N) – person to whom the letter is addressed

postmaster (N) – the head (person) of an individual post office

soldier (N) – a person who serves in the military

sort (V) – separate letters into groups based on destination

Yesterday, a headhunter offered me a new job. The headhunter emailed me a message about an opening at startup company. I already had a job that I liked very much. But the offer intrigued me

I thought about the pros and the cons. I owe money for my house. I have four "mouths" to feed (my family). The higher salary would be useful. The work would be interesting.

Tooday, I accepted and they are hiring me.

availability (N) – being available, having an opening in one's calandar to do something  or schedule an appointment

headhunter (N) a person (male or female) who searches for skilled, new employees for a corporation; a personnel recruiter

intrigue (V) – interest very much; cause to be curious, fascinated by somethng new and unusual

pros and cons (expression) – the good points and the bad points

recruit (V) – to actively search for new people to join a group, corporation, or military

Change sentences so that the focus is on the employee not the personnel recruiter.

Note that when a person is contacted regarding a new job opportunity, it is customary to keep the communications private.  The name of the company and the recruiter is not mentioned.  The employee usually says very little while considering the new position so that  he or she does not compromise his or her existing job.