Grammar-Quizzes › Verb Phrases › Verb Groups › Modals › Might have vs. Must have

Express varying degrees of certainty about past events

infer (V) – to form an opinion that something is probably true because of information that you have
inference (N) – an opinion that is formed on details or knowledge that you have
panic / panicked (V) – a sudden strong feeling of fear or nervousness that makes you unable to think clearly or behave sensibly
speculate (V) – to guess about the possible causes or effects of something, without knowing all the facts or details
totaled (Adj) – not worth fixing; totally gone

One word with two meanings

The title is a play on the words "in plain sight". 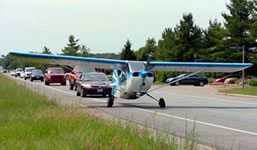 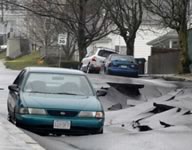 Diana: It looks as if the ground is swallowing the car. Rain must of washed the soil away under the road.

Alan: Or a water main might have broke leaving a hole.

Diana: I wonder how the car got there. The driver might parked it there the night before.

Alan: Or the driver might have trying to pass the damaged road by driving on the side.

Diana: Either way, the driver must being frustrated to learn his car is caught in the hole. 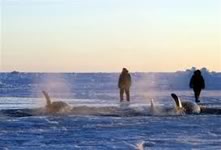 A pod of killer whales was found surfacing through a breathing hole in the ice of Hudson Bay, Quebec.  The whales were taking turns rising up through a single hole which was about the size of a pickup truck. The whales (became) trapped by a late winter freeze.  Observers thought there (were) as many as a dozen whales including several small ones.  Some observers worried that some whales (become) trapped under the ice and died.  The mayor of the remote Inuit community called for an icebreaker to save the whales, but none was nearby. Other people made plans to enlarge the 30 by 30 foot ice hole with chainsaws. The mayor was against these plans because they (put) local people in danger of falling into the ice hole.  However, changing weather conditions overnight allowed the ice to break up and the whales to escape.

This incident was rare. Normally, as the ice moves in and breathing holes close up, Arctic animals move south. This pod of whales (was) confused.  Biologists believed that the late freeze (caught) the whales unexpectedly.  With global warming the Arctic area is freezing over later and later.

The area usually freezes over at the end of November. Locals think these whales (stayed) to feed on an abundant supply of seals, sea lions and other small whales.

The local people found that neither they nor the Canadian government was well-equipped to help the whales escape. Had the ice not broken on its own, most of the whales would have died.  For the remote Inuit community of Inukjuak, Quebec, this (was) a worrisome experience.  Fortunately for all, it turned out well.

breathe (V) – take air into the lungs and let it out; respire

escape (V) – get away or out of a small space (jail, prison)

freeze (V) – become cold and change from water to ice

icebreaker (N) – a large ship capable of breaking through ice

observer (N) – a person who is watching, paying attention

pod – quantifier for a family of whales or dolphins

surface (V) – rise above water  into the air

take turns – one after the other; share in a fair manner

trapped (Adj) – caught within a small space or object

Change the wording to a past modal — might have or must have.