Grammar-Quizzes › Noun Phrases › Nouns › Pronouns › It vs. This

Refer back to something

Referring back to a subject with emphasis

prototype (N) – the first form that a new design of a car, machine etc has, or a model of it used to test the design before it is produced

Referring to an earlier or later mentioned topic

¹The AppleCar is fictional (not real). It is used above for the purpose of example.

topic (N) – a subject of conversation or discussion

This vs. That – distancing 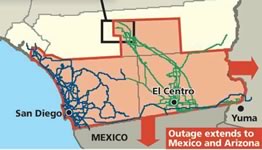 The electrical network in the southwestern states was made to resist power outages. [It/This] was designed in the year 2000.

The electrical network in the southwestern states was designed to prevent one local malfunction from causing a blackout for millions of people. But [it/this] didn't prevent the exact event from happening Thursday in San Diego, parts of Arizona, and Mexico's Baja peninsula.

[It/This] started when a piece of equipment was switched off at a substation in Yuma, Arizona along the border with Mexico.

To make matters worse, the power fluctuation caused two reactors at the San Onofre nuclear power station to shut down. [It/This] cut off even more of San Diego's power supply. [It/This] happens whenever the computer system is trying to rebalance the load on the network

The chief operating officer of San Diego Gas & Electric Company said it is possible that extreme heat in the region also may have caused some problems with the transmission lines. [It/This] is possible because the temperatures in these areas were above 100º F (38º C).

A professor of electrical engineering at Washington State University, agrees that if the system was at full capacity because of high usage, [it/this] could have contributed to the problem.

Whether it was human error or some malfunction of equipment, we don't know. Usually in these cases, [it/this] is a bit of both.

The power outage left over 5 million people in the dark. [It/This]was the largest one so far in the southwestern states.

In 1965, the Great Blackout in New York left over 30 million people in the dark. [It/This] is remembered because of its baby-boom nine months later!

blackout (N) – a break-down of the electrical system causing loss of electricity (and lights).

contribute to (VP) – add to; give to, make something happen

fluctuation (N) – a change or variation in the amount of something

malfunction (N) – a problem; a break-down

usage (N) – the using or consumption of something

Use It or This /That to refer back to something.