Grammar-Quizzes › Connectors › Coordinators › But not vs. Except (for)

But not vs. Except

¹avoid (V) — the verb carries a negative meaning: tries not to eat or not be near something

liver (N) – an organ in an animal that cleans blood

polarity – in grammar, an element in the sentence that is sensitive to (affected by) a negative word or meaning in the sentence.  Some–Any Polarity; Too–Either Polarity.

Also see Besides vs. Except for (setting aside information–including or excluding) and Prepositional Complements.

Before "Do" or Verb + Preposition Phrases

engage in (verbal phrase) — occupy the attention or efforts of person; occupy oneself

Nothing but / All but

If not for / But for

"A lot has been written about these phrases.  To put as charitable a light on the matter as possible, most of what you may read is out of date.  We have hundreds of citations for these phrases, and we can tell you two things for certain: these phrases all mean the same thing — "to be unable to do otherwise than" — and they are all standard."   (Merriam Webster 220)

See Pop-Q "Except for" 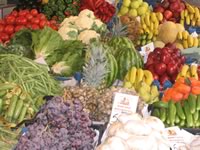 Complete the sentence with an exception or generalization.

Complete the sentence with an exception expression.