When and Where Clauses

Add a modifying clause for time or location

When and Where  - object pronouns

When or Where Clause

Relate the clause to the time noun or place noun

Relate a time or place clause with at, in or on

A Time Which and A Place Which

*not used / ~borderline or questionable usage

An identifying clause adds information or narrows the noun to a specific one, group or lot.  The clause helps by telling us which one. No commas are used.  It is also called restrictive, essential , or necessary clause. See That vs. Which   Some or All.

A nonidentifying clause adds extra information about a noun already identified by other means, for example, by name, by shared knowledge or context. The clause, a comment, is set off with commas (before and, if necessary, after the clause). It is also called nonrestrictive, nonessential,  or unnecessary clause. See Commas (adding comments).

live (V) – [1] be alive: He is not dead; he lives! Long live the Queen! [2] dwell, reside: He lives at 231 Ellsworth. He lives on the corner. He lives in San Francisco. (Live is a verb that is complemented (completed) by a prepositional phrase such as in, on, or at. See Verb + Preposition and Verb+Prep List.

¹An object relative pronoun cannot be omitted from (left out of) a nonidentifying clause.

The Right Time or Place

Change when or where to a which-clause

Every day hundreds of people pass through the San Francisco Ferry Building, a place where a variety of products and services are available. The San Francisco Ferry Building is the place where commuters catch their ferries at. It is also a place where people come to walk and watch activity on the bay. The area inside in which people shop for food is also where people can find restaurants and shops. Shops where you can buy meat, cheese, bread, mushrooms, plants, coffee, herbs, and so on.

The Ferry Building was built at a time there were no bridges in 1875. People had to take a train to the Berkeley or Oakland ferry terminals, there they would catch a ferry to San Francisco. When the Bay Bridge opened in 1936, the Ferry Building became an unnecessary place at which the ferries were forgotten. In the 1970s, when the traffic on the bridge made the commute difficult, ferry boat service resumed. Now the Ferry Building serves as an activity center where San Franciscans shop, eat, catch transportation, and relax near the water.

available (Adj) – easy to find or get

ferry (N) – a commercial service with terminals and boats for transporting persons, automobiles across small bodies of water.

variety (N) – having different kinds or types of things 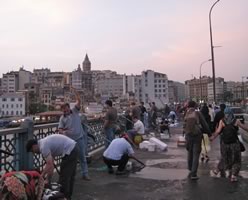 The Galata Bridge in Istanbul is a unique location in the world.  It spans the Golden Horn at a site in which a natural harbor forms. It is the exact place in which the Bosporus flows into the sea of Marmara.  It is also the place at which the old Istanbul meets the new.

This is the fifth bridge in this location. The last bridge was destroyed in 1992 the year in which a fire badly damaged it. The bridge has three car lanes and one lane on which trams go.

In the evening, the time in which fisherman come to catch their evening meals, the bridge becomes a bustling place. Sunset is also the time at which the faithful are called to prayer. Tourists and locals walk along the first deck on which there are a number of restaurants and shops. Fisherman stand side by side at the railing at which they cast their lines into the water. Never is there a time at which the bridge is not completely occupied and bustling with people.

deck (N) – a floor or roadway on a bridge

Change the which-clause to a when or where clause.