Recognize how it can function in a clause

An Adjective vs. Other Modifiers

The leaf was two inches wide. Modifiers to Adj

There are a few post-position adjectives: He was a dollar short.  There were stars galore. He is the President elect. He has problems aplenty. There was money available. He is a Poet Laureate and an Attorney General.

See Clause – Phrases for the parts that make up a clause.

Tests for the Adjective Category

Adjective is a distinct class of descriptive words indicating qualities such as size, shape, color, worth, age, and so on.

property (N) — an essential or distinctive attribute or quality of a thing. (Word categories are usually defined with two or more properties.)

¹ Logically, degree modifiers are not used with words that have absolute meanings; for example, *He's rather dead, *somewhat opposite, or *very unique. See Absolute and Non-gradable Words.

² falling is not adjectival (like an Adjective).  See Participle Modifiers 2

Why do leaves fall?

Why do leaves fall in autumn? Does the wind blow them off or is it the cold weather that kills them? In spring, a tree takes water from the ground and uses stored energy to grow new leaves. The leaves are "food factories" that capture sunlight and carbon dioxide. Chlorophyll, which gives plants their green color, helps change carbon dioxide, water, and sunlight into oxygen and glucose (sugar).

This process is called photosynthesis, a Greek word meaning "putting together with light". The tree uses and stores this food for later use.

Throughout the summer, the tree leaves remain green. As winter comes, trees prepare for cold and freezing weather. Trees conserve energy by shedding leaves that would likely be damaged in the winter.

autumn (N) — another word for fall, the season after summer and before winter

factory (N)  — a large building where a product is made

store (V) — to keep and save for later

Which word, phrase or clause is the modifier?

One could argue that carbon-dioxide is a compound word or that it is a noun carbon modifying a particular type of dioxide (different from sulfur dioxide, titanium dioxide, uranium dioxide, etc.)

In fall, special cells thicken at the base of the stems of the leaves. The cells are called abscission cells because they function like scissors. These cells block the tubes through which water flows. The cells eventually separate the leaves from the tree.

This process of shedding leaves protects the tree from the loss of energy and freeze damage. With less water, the bright green chlorophyll fades. More of the leaf color shows when the green chlorophyll is not present.

Waste that is in the leaf makes it appear brown. Anthocyanin, a pigment also found in grapes, apples and beets, makes the leaf redder.

It's not clear how the red color in the leaves helps the tree; however, the color does make the tree more desirable for planting.

abscission (N) — the act of cutting off; the normal separation of flowers, fruit and leaves from plants

cell (N) — in biology, the basic structural unit of all plants and animals  (Also, a small unit, room, or compartment)

damage (N) — injury, harm, cause something to be hurt

eventually (Adv) — at a later time it certainly will happen

Identify the word form of the modifier highlighted in the sentence.

Spring is the time when blueberry plants begin to take up water and nutrients from the ground and sunlight from the sky so that they can feed themselves and can grow again.

As the weather warms up, the buds begin to swell. The flowers that are emerging push open the scales, which eventually fall away from the flower.

The flowers attract bees that collect the flowers' yellow, sticky, sweet pollen and carry it to other flowers. Other flowers receive the insects and their pollen, which is a necessity part of the pollination process. Pollinating flowers can then develop into fruit—blueberries.

After the flowers petals emerge, the leaves begin to emerge, grow, flatten, and turn toward the sky. The leaves take in sunny light, water and nutrients to feed the rest of the plant. Within a few months, the bright, blue, delicious blueberries will ripe and edible.

edible (Adj) — fit or suitable for human consumption; not poisonous

emerge (V) — come out of an enclosure or smaller space

nutrients (N) — vitamins and minerals from the soil, the ground

outgrowth (N) — something that develops from something else, as a natural result of it

scale (N) — covering of the flower in the bud form 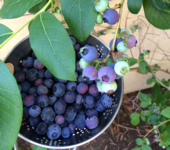 Edit for Errors  (adjectives and other modifiers)