By the time vs. When

~ Awkward sounding; by the time is more commonly used.  See Will / Will have (Future Perfect).

By the time expresses that the end-point of one activity (with duration) is the point-of-time for viewing the timing of another activity, “not later than the time” [possibly before and up to X point of time].  The expression is used to compare or estimate relative progress of one activity to another.  [temporal location prepositional phrase]

time-frame (N) — "window of time", a period of time, especially a specified period in which something occurs or is planned to take place

By — "Possibly before and up to X time"

* incorrect or not-used wording.  ~uncommon usage or usage that requires a special context.

assessment (N) – estimation (in this case, the point for evaluating the progress or completion of the other activity)

Adjust future, present and past timing

Express a milestone in personal development

Until "up to"  vs. By "possibly before but no later than"

¹ Until – "up to the time of" often includes an understood but not explicitly stated starting point. From birth to 18 months, she did not walk.

milestone (N) – a significant event or stage in the life, progress, development of a person (business, nation, etc.)

Relate the progress or completion of one activity to another

archive (N or V) – a collection of historical records or film; to store records

archive (N) – a collection of historical records or film

Complete the sentence with a future progressive or perfect verb tense. 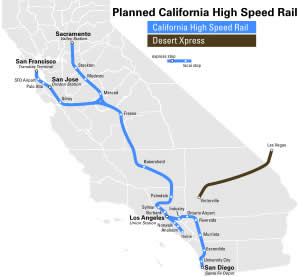 California has been trying to build a high-speed rail (train) as a clean-energy alternative for travel within the state. By November, it will be four years since the voters approved a proposition to build the project. The original estimate for building the high-speed rail was around 40 billion. By the time the train is actually built in 2030, the cost will have rose to five times that amount.

The system will extend from San Francisco and Sacramento, via the Central Valley, to Los Angeles and San Diego via the Inland Empire. The state expects to complete a 130-mile initial construction segment from Merced to Bakersfield in the Central Valley by 2017. By then, it hopes to have been made a final selection for a route to the San Francisco Bay Area.

Some concerned people in towns such as Palo Alto have tried to block the train from passing through their neighborhoods. The High-Speed Rail Authority has come up with various solutions, raised and tunnel, so that communities will not be disturbed by the passing of the train.

Many hope that these problems will have been solving so that the project can continue. Getting so many people to agree has been a difficult task. Many people joke, "By the time that train is finished, I will have passed away!"

has come up with (VP) – has planned

proposition (N) – a project requiring a vote of the people

solve (V) – find an answer to a problem

task (N) – small project or job within a larger one

Decide whether the sentence is correct or incorrect

What picture do you have of the future? Will life in the future be better, worse or the same as now? Will this hot, flat, and crowded world be "standing room only"?  People hope that by the year 2100, many of our current problems will have being solved.

Clean water will be one of the most valuable resources.  Demand for water will have been increased ten times.  In fact, there could be a serious shortage. Will water be more valuable than oil?  Will we have found a way to preserve our most precious resource by 2100?

Energy will come from a variety of sources: wind, air, solar, hydrogen fuel, and nuclear fusion.  Cars will have stopping using gasoline and will be using far more efficient means of getting around.  Public transit is expected to play a larger part in our daily lives.

The boundaries between entertainment and education will disappear. "Edutainment" will have took over as the preferred system of learning. Parents stories of having carried backpacks with 60 pounds of books will be a  source of amusement for children.  Learning will be "on demand" and focused to specific needs in the world job market.

Air travel will be safer and faster.  Computers will operate aircraft with sensors, which will make them incapable of having collisions with other aircraft or phenomena of nature. Problems that grounded the Concorde (SST) will have being resolved by engineers, and passenger aircraft will travel at a speed of Mach 0.1.

Robots will continue to replace people in manufacturing; however, personal services will be in high demand.  However, by 2100, companies have replaced phone trees with human operators.  Local items such as food, clothing, and furniture with an "artisanal" touch will again be preferred over more polished, less expensive items produced by robots.

What experts cannot predict is whether we will be kinder, more caring people.  Will we have understood that violence and war only cause pain and despair? Will we be able to share earth's resources?  Will we have stopped looking at our differences and start seeing our common goals?

artisanal – a marketing buzz word for being hand made or produced

crowded (Adj) – filled with too many people or things

focus (Adj) – limit to a smaller circle of attention

on demand (p.p.) – available, easy to get when someone wants it

play a part (v. phrase) – be included, be instrumental in a larger plan

public transit (N) – transportation for everyone (not private)

sensor (N) – a mechanical device that is sensitive to light, temperature, radiation level, or movement, and which transmits a signal to a measuring or control instrument